Your appointment will be confirmed via email or phone.
No Sunday appointments or on major holidays.

Why do I need to have my chimney cleaned?

All chimneys, whether connected to a fireplace, wood stove, oil burner, or gas burner should be cleaned and inspected regularly. Fireplace and wood burning stove chimneys develop a coating of creosote inside the smoke chamber and flue system. This will become a fire hazard if not removed. Creosote will go through a chemical transformation if left undisturbed and become a thick shiny glazing that is very difficult to remove. It is in this state that it is most flammable. We call this condition third stage creosote. Third stage creosote can not be removed with conventional cleaning methods such as wire brushing. It must be first treated with a chemical to change the molecular properties and then it can be removed. This will usually take two to three visits and can get expensive with the added cost of the chemicals used. Burning properly cured wood and having your fireplace and chimney serviced annually will go a long way towards preventing a third stage creosote buildup.

Oil burner chimneys can easily get clogged with soot. Oil is the dirtiest burning fuel and its products of combustion are very volatile and corrosive. Neglecting to clean your oil burner chimney can lead to several consequences. All masonry chimneys have a point at which the horizontal pipe from the oil burner meets the vertical chimney flue. Over time this area will fill with soot and clay from the lining. As the debris piles up and fills the horizontal pipe from the oil burner, it effectively reduces the amount of natural chimney draft reaching the appliance. Keep in mind that not only is the chimney responsible for pulling the fumes from the oil burner to the outside, but also to draw the required air to be used for combustion into the oil burner itself. So from the information gathered so far, you can deduce that if your chimney is partially blocked, less air will be pulled into the burner which can alter the ratio of air to fuel during combustion causing excessive soot production, and the extra soot will have a hard time getting out of the chimney due to the weaker flow characteristics of a poor draft. This extra soot falls down to the base of the chimney under its own weight and compounds the problem. The warning signs would be a dusting of soot near the base of the chimney or on the top of the burner and possibly an odor of fumes when the unit starts up. If ignored, this will lead to a puff back and carbon monoxide entry.

Gas burner chimneys also need to be cleaned and inspected regularly. It is a common misconception that since gas is a clean burning fuel, gas appliances do not require maintenance. Gas chimneys can be more dangerous that oil or wood chimneys if not maintained. Many gas chimneys do not have protective caps installed. This can allow birds and squirrels, or debris from overhanging trees to enter the flue. Others have old terra cotta linings which crack and flake causing a blockage. Some were used in the past to vent an appliance that uses a different fuel type and break down even faster when connected to a new gas unit feeding it with moisture laden gases. Any blockage in a gas chimney can cause deadly carbon monoxide fumes to enter the living area. The reason that this can be so dangerous is that carbon monoxide is undetectable by any of our senses. When gas is burned, three byproducts are produced; carbon monoxide, carbon dioxide, and water vapor. In comparison, burning oil produces many aromatic hydrocarbons which you would notice, and promptly evacuate the area. Gas gives no such warning and this is why many lives are claimed without the victims ever knowing what happened.

Why should I deal with a CSIA certified company?

The CSIA is the only nationally recognized certification organization and dealing with a company that carries their certification ensures that you will have a properly trained individual working on your system. The only way to become CSIA certified is to know the criteria and pass the exam. Don’t confuse this with other organizations that will be happy to allow anyone with a check and a name to become a member.

I have yellow colored drip marks coming out of the base of my chimney and on the smoke pipe of my heating unit. What is this and why is it happening?

This is becoming more common as heating appliances become more efficient. Usually it is due to improper sizing of the chimney flue in relation to the outlet size of the heating unit. Most heating system chimneys utilize an 8” x 8” flue pipe which has an interior dimension of about 7” x 7”. This was suitable for heating systems of the time when this standard size originated. Now, as oil and gas burners become more and more efficient, they use smaller outlets and put less heat up the chimney in the interest of keeping it in the home. The disadvantage to this is lower stack temperatures in the chimney. For every cubic foot of gas that is burned, 2 cubic feet of water vapor is produced. If the appliance is hooked up to a flue that is too large to heat to the proper operating temperature, the warm gases cool upon contacting the cold chimney walls and condensate forming droplets that drip down to the chimney base while picking up sulfur and forming sulfuric acid. This is very corrosive and can destroy the clay lining or even form clumps of sulfuric acid that are so big that they block the chimney base. This condition can be alleviated by installing a properly sized chimney liner.

What to expect when we clean your chimney?

Watch this excellent video from the CSIA

The mission of the National Chimney Sweep Guild is to promote the success of its members by providing progressive services, encouraging professionalism and ethical accountability, and advancing the chimney and venting industry through public awareness of the trade.

The Chimney Safety Institute of America 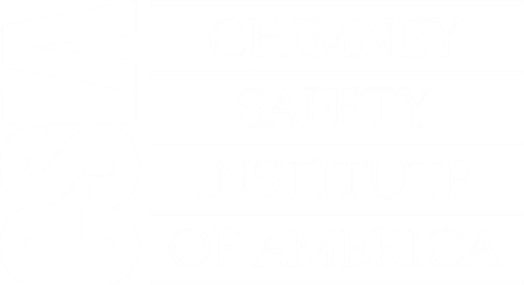 The Chimney Safety Institute of America (CSIA) is a non-profit, educational organization dedicated to chimney and venting system safety.